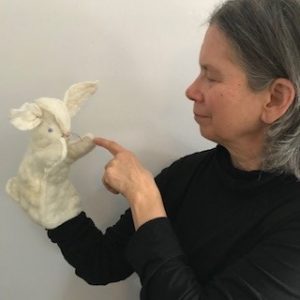 Felting is the oldest known manipulation of the natural world. It is older than stone work, basketry or claywork. That is because wool doesn’t require human intervention to felt; the wool of a sheep’s coat, for instance, is naturally felted.

Susannah White theorizes that early humans recognized this quality and were immediately drawn to felt’s versatility.

The natural process of turning frayed fibers into a solid piece of fabric is only a short leap to stunning artwork. Susannah herself has mastered that process.

Susannah began working with fibers more than five decades ago. “Our family had a farm where we spent most of time when not in school. Our neighbors were sheep farmers and I started playing with their wool back in the 1960s.” Because she loved everything textile, she discovered felting on her own. When she saw a museum exhibit featuring felted wool from an ancient tomb in China, her life’s calling was realized. As a young felter, she absorbed everything she could about the process.

Susannah describes felting as a physical change in fiber. “Any protein has scales along the fiber. You aggravate the fiber with hot water and [then add] something annoying to the fiber – like soap – which causes the scales to open up. You use your hands by massaging, rubbing, and pounding the fiber, which makes the scales lock on to one another. Once in cold water, everything contracts and locks and makes a permanent change in the fiber,” she explains.

For Susannah, felting came by way of weaving (starting with her first loom at age 13) and textile design in college. With the birth of her children, however, Susannah didn’t have the luxury of time to warp a loom. She returned to felting by fashioning felted toys for her kids. “I believe strongly that children should have the most carefully made objects in their life,” she maintains, “and the objects most thoughtfully done should be for children.” “When I was young, my dad traveled all over the world and would bring back puppets. He built a puppet theater. There was one thing that frustrated me: he gave me Steiff hand puppets. They are fun to work with but when you removed your hand, all the life left them like a deflated balloon. I was always sure to make puppets so they retained some life force. I wanted my puppets to have a lively aspect whether or not they are in use,” she says.

To be sure, her passion for shepherding, feltmaking, quality craftmanship, and puppet artistry all intersected in her unique work. 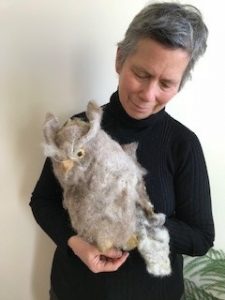 Susannah’s puppets and performing objects are made from the wool of family or friends’ sheep. The vibrant colors, she says, come either from plants or from the natural color of the wool. “Because I work in textile design, I am aware of the carcinogenic and mutagenic qualities of commercial dyes. Plant dyes are relatively harmless, depending on the mordant used. I only use alum and cream of tartar. The colors are very beautiful— they can be very intense or very subtle — and have a distinctive living quality to them. They complement one another. Each year I grow or wild harvest more of the plants I need for color,” she says. Indeed, at this point, Susannah only purchases three plants for dyes: indigo, brazil wood and madder. And this year, experiments with growing indigo began in the Cambridge Community Garden. “We successfully grew and harvested fresh indigo and dyed both wool and silk, though only in small amounts. We’ll see if we can increase the amount of color we get next year.”

“If you are looking at old rugs or tapestries and see that beautiful rose/salmon color,” she says, “that’s madder.”  (One time she accidentally fermented some madder. Not wanting to waste it, she threw some wool into the dye and was delighted to get a brilliant red from it!) It is the capricious unpredictability that makes dyeing with plants so fascinating and lively for her.

Currently, she is most delighted by making sweet and simple mouse and chicken finger puppets and never tires of these characters. “Part of being a craftsman is that you spend your life developing your skill and then you spend whatever remains of your life just doing it. It is not my goal to make anything different. My goal is to make everything well. I’m at the phase in my life when I know what I am doing,” she says. But even after 40 years of working with felt, she has still taught herself more. She has recently learned that the tighter a puppet is on one’s hand, the more control one has.

Susannah is not just the artist behind the scenes. Three generations of her family, collectively known as Dancing Hands, give performances to audiences for free, though COVID has postponed most performances over the past 20 months. She takes pride in trying to preserve a heritage craft.

In summing up her craft she says, “There’s that saying that one person can’t change the world. But one person can make felt, which is a permanent change.” 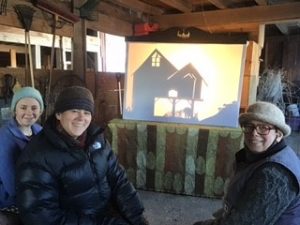