Mary Lou Strode, a member of Valley Artisans Market since 1981, is a painter from Argyle, New York. Here is her journey in art in her own words. The painting shown is titled, Snowmobile Trail.

In the Beginning I Drew

“My earliest memory of drawing was sitting on the floor of my grandparents’ home in Rutland, Vermont looking at the “funny papers” and drawing an X. How that simple maneuver could have spawned a lifetime of art remains a mystery to me. However, at the time, I was amazed at being able to control the pencil or crayon and make it go the way I wanted it to. I think now that it was a realization of being able to make something that I had thought of making and to have it coming out the way I had envisioned it.

“All through my childhood I drew. I never thought of painting and was always content to just draw. Always with pencil, I drew people mostly. Being an avid movie-goer I bought movie magazines and drew the stars — at first just the faces, but later the bodies as well. The pin-up artists of those years were my idols. In high school my art teacher, Lucy Doane, encouraged me to paint. As an older chiId, I had once done an oil painting under the tutelage of an amateur artist, Elmerine Bove Finn. She gave me her oil paints, brushes and a new canvas board to use and for subject matter I chose a photograph of sailboats that advertised Seagram’s whiskey. I still have that painting!

“Having decided that I wanted to be an artist I majored in art in college. This was during the 1950s when abstract expressionism was the prevailing style. Franz Kline, Robert Motherwell, Willem De Kooning, and Helen Frankenthaler were the artists of the slashing brush stroke that occasionally resulted in recognizable subject matter but more often the result was impenetrable. It was the overall composition and the energy expressed that did it for them and, at the time, for me. Encouraged to paint this way, we did not use expensive oils but cans of enamel paint. After graduation I married and moved to rural Washington County, New York, and learned to look and paint all over again. How and what I should paint now that I was on my own away from the mentors of my youth and living surrounded by nature became my preoccupation. Should I continue to reject the living world and paint what the canvas and the colors dictated? Or should I embrace the world around me giving in to its beauty and wonder and attempt what at the time was nearly impossible. I really had to begin again but at the same time I had learned a facility with brush and paint that gave me a head start in the process of looking and painting what I saw.

“I am also a printmaker and my medium is silkscreen printing. A fine Dacron mesh, oil-based inks, wax paper stencils and a squeegee are the materials I like to use. Once, when I was teaching a class of kindergarteners, I was illustrating the assignment for the day. They were to simply paint some shapes and then turn the paper upside down and see what was there. As I was doing this for the class I turned my painting upside down and saw two happy figures prancing with banners. This serendipitous moment later inspired a design for a silkscreen print and a valentine.

“My studio, located on the upper floor of our house, beckons, welcomes and more often than not admonishes me for not getting in there and buckling down. Once I enter and begin to work the hesitancy evaporates and I enter a realm of mystery and revelation and curiosity and contentment. I am working and I am at peace.” 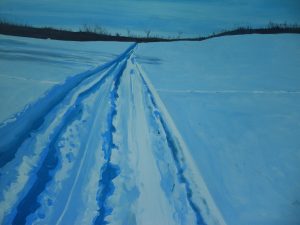