Emily Crawford dreamed of working as an undercover agent. She attended Hamilton College with the intention of being recruited to the CIA. But instead of becoming a spy, she pursued what she did best: art. She graduated with a degree in studio arts with a concentration in sculpture.

Emily knew she would find her way back to art, but first she had many other paths to follow. (During one of those paths, she worked as a website designer for 17 years. She helped design and build VAM’s website.) But after a recent job change, her attitude shifted. She prioritized art and career together.

She joined a friend at a class at the Saratoga Clay Arts Center in Schuylerville. When she put her hands back into clay for the first time in 30 years, she found her way back home.

“When you are an artist at heart, you are always creative in your life: the meals you make, the Halloween costumes you sew,” she says. But once she felt that clay, she didn’t want to get another job supporting creatives in their dreams. She wanted to put her artistic life front and center in her career, as well. She gave herself six months to delve deep into growing her own creative business. She rented a studio at Saratoga Clay Arts, built a web site, took classes for artists building creative businesses and began throwing clay. It worked. People are purchasing her work and she is refining it, and growing an learning more every day.

Her childhood home in Nova Scotia is the inspiration for her clay creations. “Everything I do is nautically inspired. I grew up going to Nova Scotia every summer and I stayed in our ancestral home. It is right on the Sissiboo River, off the Bay of Fundy.” The place she describes sounds magical. There are 40-foot tides, which allow for abundant beach combing. “On one beach, you have to walk a quarter of a mile to reach the ocean when the tide is out. There are all these tidal pools with seaweed floating around,” she says as she takes out a celadon green bowl, inspired by those pools.

In the summer the ocean is “a deep, deep green, almost an emerald. But then the ocean dramatically changes color from summer to fall. It turns a beautiful blue,” she says. She picks up a mug with colors graduating from black to a deep blue.

Looking closer at Emily’s pottery, one can see colors, textures and patterns based on the ocean. There are splashes and ripples, and mottled areas that look like sand. She points to drippy areas resembling waves lapping on the beach. The names of her pieces reflect her inspiration: Atlantic Splash, Sissiboo Tides, Beach Waves, Northern Lights, Fog.

Using Nova Scotia as her entry point into imagination and creation, Emily finds new ideas not only from the colors but also the shapes she sees. She makes “buoy bowls” that look like vases but the bottom resembles a buoy shape. On one of the buoy bowls, she pressed netting into the clay for texture. “I get so much inspiration for new textures in my work from beach combing.” And it’s hard to ignore the three-foot high sculpture of a lighthouse on her studio work table. If all goes well in the kiln, this piece will be the focal point of her upcoming show in the Small Gallery.

The lighthouse is simple, with just three flying birds etched into its side. She etches or paints the same birds into all the pieces she makes, a sweet reminder of the ocean and sand and tides. “That’s the core of who I am. The ocean – and my time in Nova Scotia – is my soul.”

In the future, she would love to create a Washington County series. She envisions visiting farms and using the inspiration she finds there to throw undiscovered shapes on her portable wheel. She hopes to join the ASA show and see the sale of her work go towards saving local farmland.

Her work may not involve the exciting life of espionage for the CIA but it fulfills her completely. She has never been happier.

Emily’s high-fire bowls, mixing bowls, mugs and other food-safe pieces are dishwasher- and microwave-safe. Emily has the next show in the Small Gallery, March 22-April 16. Her opening reception is March 30, 3-5 pm. 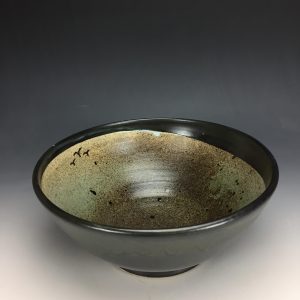