Some knew her as a quilter, some knew her for the makeup work she did for film and television, but we knew her as a talented multi-media artist, phenomenal salesperson and friend. Leslie Fuller was a member of Valley Artisans from 1988 until her death on Nov. 1, 2017. She will be missed. 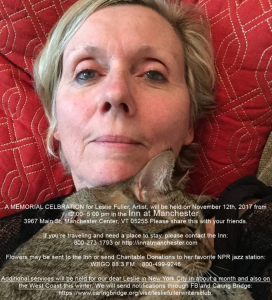 Leslie Fuller, an iconoclastic artist in several media including fabric art, drawing, makeup design and film making died at home in Sandgate, VT on November 1, 2017 after a long illness. She was 70.

Born in Pasadena, Ms. Fuller began working with cloth in Claremont, CA where she was raised. She studied in the California watercolor school at an early age, giving her a basis for color, technique, and a trained eye for the natural beauty of landscape and light. With her pan-creative approach to the arts, she developed a synergy of disciplines including drawing, painting, fashion design and photography, which lead to an interest in filmmaking.

Ms. Fuller completed her MFA at The London Film School in 1969. She returned to California to continue studying photography and made practical Mandala Quilts from re-purposed cloth. Working large paralleled her ‘big screen’ imagination with full size quilts used both on and off the wall.

She moved to Sandgate, VT in 1971, enjoying a fruitful period as an Art Quilt maker, focusing on commissioned appliqu landscape pieces, which were collected and included in many gallery shows and fiber-art publications. She also produced small illustrations on paper, contrasting and complimenting the large quilted pieces.

‘As my “Clothworks” evolved, I was always looking for a fresh palate to express my vision’, Ms. Fuller said. This led her to begin painting on white silk satin with airbrush dyed elements. From her fascination with the play of light on naked silk and an appreciation of the white-on-white quilted works from the 19th century, Ms. Fuller was inspired to begin making “Quilted Drawings”. Combining her pen and ink skill in contour drawing and using her sewing machine as the drawing tool, the “Quilted Drawing” became a sensual, three dimensional representation of her subjects as abstract designs in clothing or framed art.

Ms. Fuller began her second career as a Make-up artist for motion pictures and television in New York City in 1980, the ‘day job’ to support her art work. This combined her skills in painting and photography with her keen interest in the interaction of people. Working on productions like “The Juror”, “You Me and Dupree” and “Wall Street: Money Never Sleeps” gave Ms. Fuller a stimulating contrast to the simpler Vermont life.

Ms. Fuller’s philosophy was, ‘Being an artist is a point of view. Everything an artist does with that intent, is art.’ Ms. Fuller is survived by Rick Raphael, her husband of 37 years, their son Sean Raphael and her two brothers, Dr. James Fuller, MD and Tom Fuller.