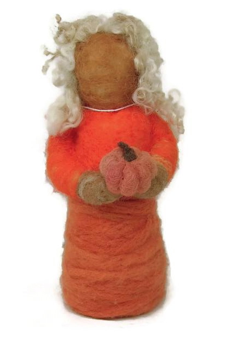 Naomi Faltskog has only recently learned her whimsical craft. Her felted wool creations sprung from her daughter’s time attending the Waldorf School in Saratoga Springs where artistic expression and creativity are deeply explored. But Naomi has been heavily involved in art ever since high school and is drawn to many media. Felting is the easiest because it is accessible and compact and she doesn’t need extensive time, space or concentration to do it, which is in short supply since Naomi home-schools her daughter.

Naomi creates her work with needles, by repetitively stabbing the wool to tangle and felt it together. It is a labor-intensive process and, you guessed, a lot of pin pricks in unwanted places. Much of the inspiration for her work comes from children’s stories. The piece she has at VAM with tree roots was inspired by the German tale, “Story of the Root Children.” Her intention for the play set was as a lap toy for long car or plane trips without electronics, so that a child’s imagination could be awakened. (There are also no little pieces to be lost or bothersome electronic sounds or electromagnetic rays.) Naomi recently began “wool painting,” a process where she builds up layers and layers of wool to create a picture, just like painting with oils. She hopes to explore this art form more in the future as well as wet felting. Naomi is proud that all of her wool is locally sourced, some of it already dyed but some that she dyes herself. She uses onions skins (for flesh tones) and turmeric (for golden-red hair) – and we imagine it is a great science home-schooling lesson, too!