As a child, Teru Simon didn’t go to church. Her sister joked that their religion was visiting galleries and museums instead. Teru fondly remembers Tuesday and Saturday afternoons spent accompanying her father to art openings, where he knew all the artists.

Teru’s voice fills with wonder and pride when she talks about her childhood. “I had an incredibly rich life” surrounded by art and artists. Her mother was a poet, writer, composer and book author. Her father, along with three other artists, founded the Skowhegan School of Painting and Sculpture. She was brought up around a new wave of abstract expressionists who went there to study under her father. (She remembers having dinner with many renowned artists, and rattles off a list of names including the likes of David Hockney.)

Her grandparents were well-known collectors and she grew up with “heavy duty art on the walls, like Cezanne,” though she didn’t understand the value of these works. The art was simply “images that spoke to the family.”

Though she sells her ceramic work at VAM and is also a painter, Teru’s “first language” is sculpture. “My inspiration and sources for my art work come directly from the world around me,” she says. “I am a ‘humanist’ sculptor fascinated by people, their individual spirit, their specific gesture and the human metaphor.”

Because Teru has what she calls a three-dimensional memory, she is able to see a face and then go to her studio and sculpt it, without a photo. She often sees her sculptures in her mind before she begins them; an image comes to her in dreams or just pops into her mind as a completed sculpture. Then she recreates it with clay. She is also inspired by “the fact that everything is moving and changing. That really affects me.” Her pottery is influenced by the Asian aesthetic. “The markings on the ceramics and the shape of the pieces I make have Asian influence,” she says.

After experiencing a staggering number of losses in the last three years, she starting to get her feet back under her again. In the fall, she traveled to California to work with her friend and well-known ceramist Richard Hotchkiss to use his noborigama kiln. (This kind of wood-fired kiln has multiple chambers built into a hillside. Hotchkiss built the kiln in 1972 from scratch, even making his own bricks for the structure. A firing takes 24 hours and someone must stoke the fire round the clock.) She also spent a few weeks at Saratoga Clay Arts in Schuylerville making new work and is starting to come to life again in her creative endeavors.

Although Teru was a teacher to many ages over a career of 34 years, she has never stopped learning. She has just started taking a watercolor class, which she finds fascinating because it is so different from what she has done before. “I find what is there” instead of knowing beforehand what she is going to create. She would also really like to try her hand at blowing glass. But, for now, she is looking forward to “having the world quiet around me” and spending time in her studio. Amen to that. 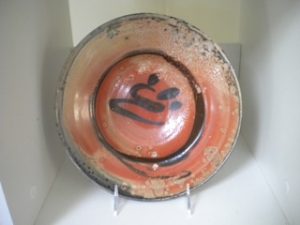 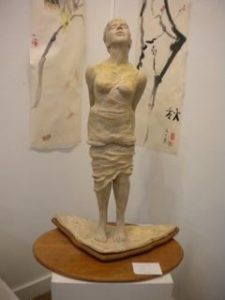 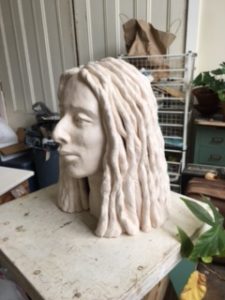 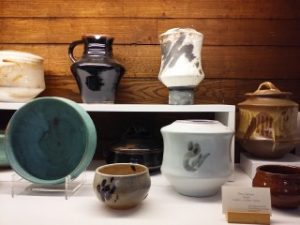