Barbara Sarvis and Judy Kniffin, visual artists and friends, have combined their most recent work for this exhibit.  While both artists focus on “nature,” it is clear that our natural surroundings invoke quite different responses from each.  Barbara Sarvis celebrates a very spiritual connection and expression, while Judy Kniffin hones in on the physical attributes and interdependence.  Both collections call on us to consider our role; what seemed external…and eternal…pleads loudly now for our full attention and careful redirection.  Enjoy this exhibit! 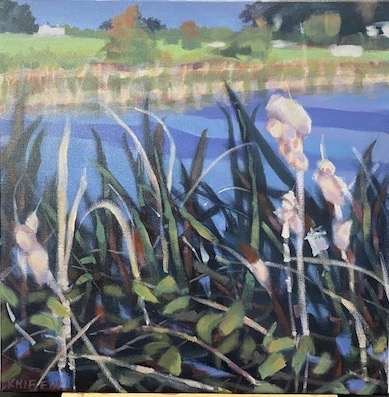 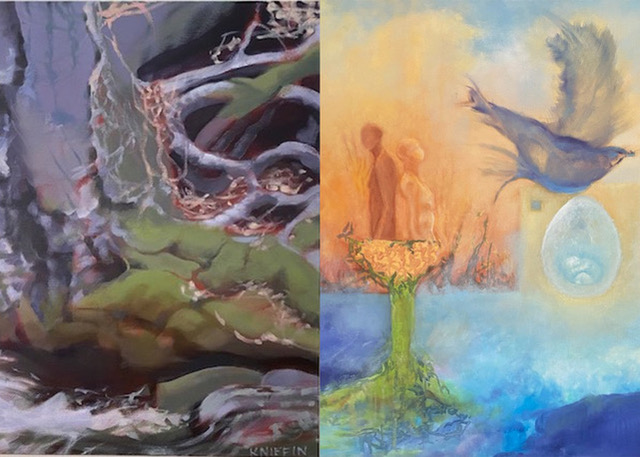 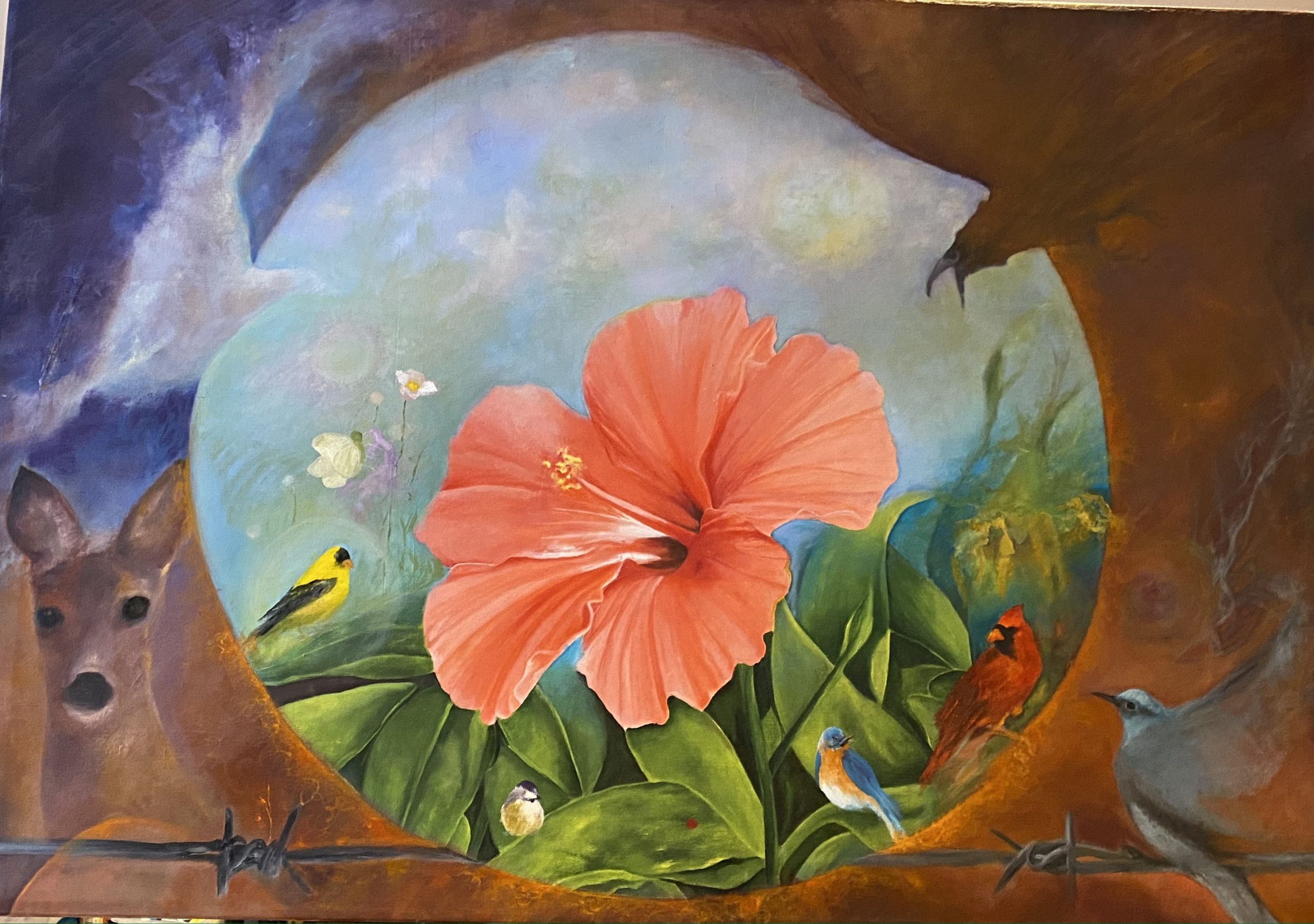 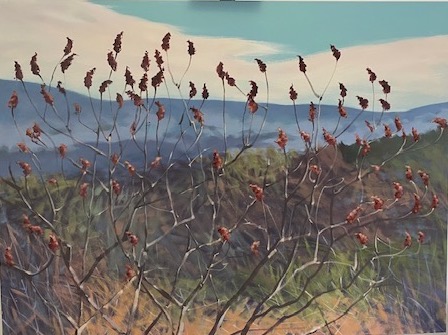 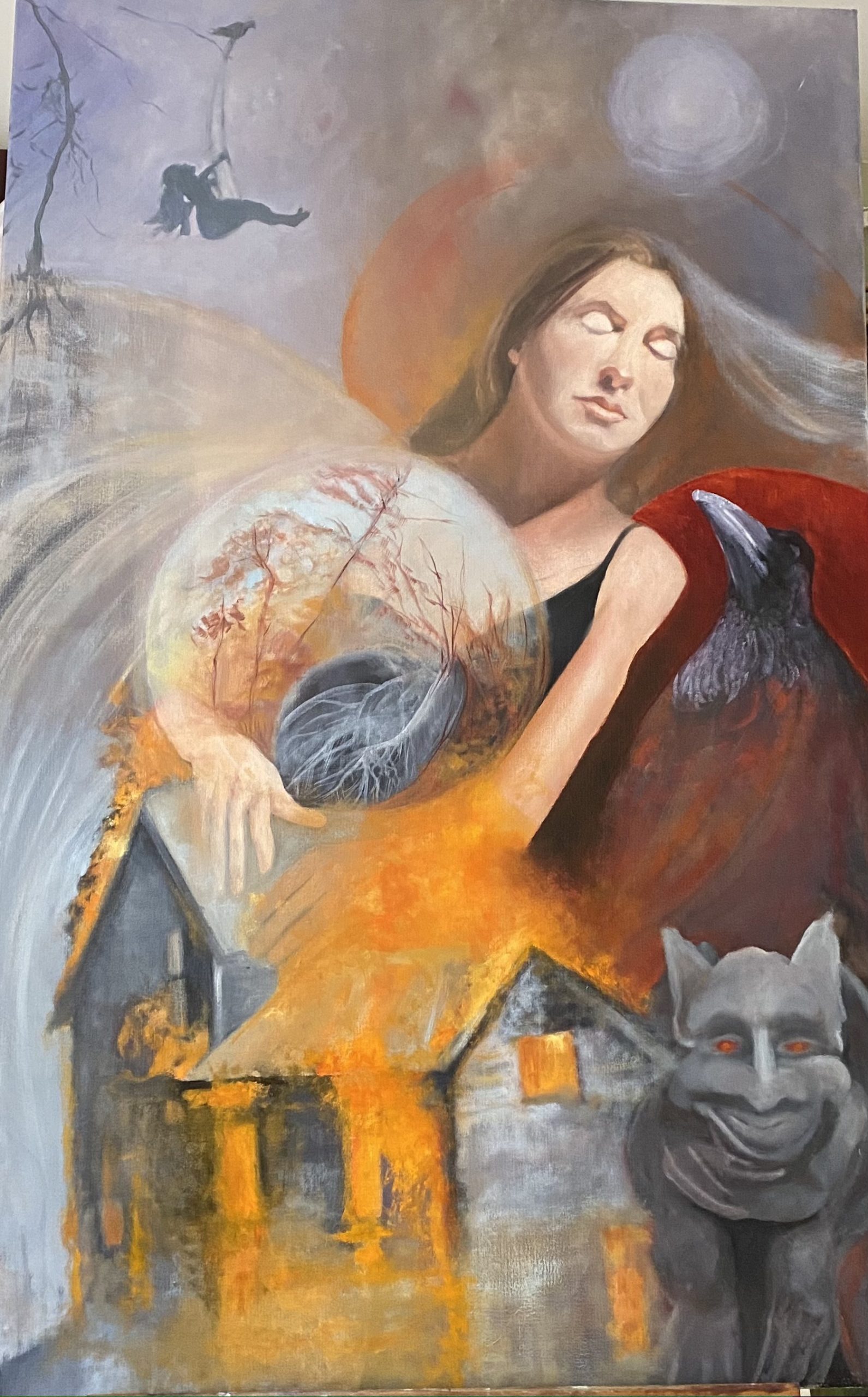 The Evening of the Blood Red Moon copy

Barbara Hageman Sarvis
My artwork exhibited in this show was created during the Covid pandemic, but also reflects a time in my life (the late1960’s), when making art was a necessary act of expression. Forty years later, I have returned to my roots, figuratively and literally, digging my feet into Mother Earth’s lush ground. The tree roots grab me around the ankles and keep me close to her spirit. She wants me to stay and I want to thank her for guiding me back to what is important-creating visual stories that reflect the need for change.
Barbara Hageman Sarvis was born and raised in Bergen County, New Jersey and academically trained at The School of Visual Arts in New York City, Vermont Studio Center, The Charles Cecil Studio in Florence, Italy, Studio Incamminati in Philadelphia. In addition, she worked as an apprentice to Audrey Flack in the 1970’s.
She continued graduate level work in both art and special education at the University of North Florida. After graduate studies, she was employed by Episcopal High School as the Visual Arts Chair. She held various art administration positions including the Curator of Education for The Jacksonville Museum of Contemporary Art and Executive Director for The Cultural Center in Ponte Vedra Beach, Florida. She served as the Chairperson of Visual Arts and President of The National Society of Arts and Letters, Northeast, Florida Chapter. During the last ten years, she wrote, illustrated and published five children’s books in addition to having two paintings published, this year, by literary journals. Presently she works as a Gallery Teacher at MASSMoCA and lives in Shaftsbury, Vermont.
Judy Kniffin

I have sketched and painted all my life, beginning—to my mother’s chagrin—on my bedroom walls.  At Skidmore College, I majored in Applied Arts, then dropped out late in my junior year to march for or against the various social and legislative issues of the 60’s.  Employment, marriage, moves, raising children, divorce, and resettlement followed, interspersed with painting classes at UCLA in Los Angeles, at the Silvermine Arts Center in New Canaan, at West Chester University and the Pennsylvania Academy of Fine Arts in Pennsylvania, and in various workshops in Vermont.  I’ve painted on dining room tables, in basements, in kitchens–and, at last, in my own studio space!

While figure painting and still lifes dominated my earlier work, when I moved to Vermont in 2003, She called to me “Do landscapes!”  I listened, and in the years that have followed, I so appreciate how painting “nature” has informed the way I see and think—in color relationships and textures, in spatial ambiguities, in reflections and shadow, light and dark—and increasingly about man’s relationship with the environment.

These pieces were painted with Golden Open acrylic colors, followed by an overcoat of Golden Regular Gel Gloss and finally with Golden Matt Polymer Varnish. They should be impervious to flying beverages, tomato sauce, and the passage of time—but probably not to sharp utensils.