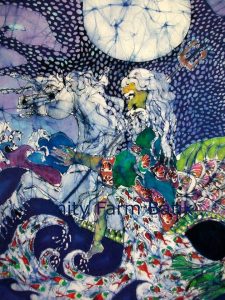 “Myths from the Wax,” batiks by Carol Law Conklin of Amity Farm Batik, will be shown April 8 – May 3 in the Small Gallery. Opening Reception: Saturday April 9th from 3-5 pm; refreshments served.

“This show includes a collection of my myth-inspired batik,” says Law-Conklin. “Batik is the ancient art of painting on fabric with wax and dyes, the wax acting as a resist to the dye. I enjoy the sensuous flow of the wax, which has a will of its own, as it spreads onto the cloth. The beeswax and paraffin have special line effects and crackling qualities. I am always excited by the magic… when I iron the wax from the fabric.”

Originally a printmaker, Law-Conklin used printmaking principles to wood burning where figures in the wood emerged from their hiding places in the grain. Soon after seeing her first batik, she created her first and has been working with the batik medium ever since (for 40 years). Carol and her husband Richard ran a jersey cow dairy farm called Amity Farm in Washington County which has provided a wealth of inspiration for her batik. She now resides in Hartford, NY and feels grateful to live in the beautiful countryside of Washington County.

Law Conklin’s batiks have been exhibited in many eastern United States galleries. She works with natural patterns, earth seasons, and loves to portray animals. Much of her work relates to fantasy, mythology and primordial themes.